During the 1960’s, when St.-Tropez, Capri and Monte Carlo were obligatory summer stops for the “Dolce Vita” set, the only way to arrive was on a Riva motorboat. Gianni Agnelli drove his Â— an Aquarama Â— at breakneck speed; a youthful King Hussein of Jordan was often snapped by the paparazzi while cavorting on a Riva Ariston in his less-than-royal skivvies; and Elizabeth Taylor and Richard Burton had a Riva Junior for those days when they needed a quick getaway from their massive yacht, the Odysseia. Gigi Rizzi, the Italian playboy who spent much of 1968 drinking Champagne and water-skiing at midnight with the French bombshell Brigitte Bardot, famously declared that she changed her Riva with every new boyfriend Â— an assessment that, even if only partly true, would have kept the Italian company in riches for years. Skip to next paragraph Riva Brigitte Bardot and St.-Tropez playmates. Riva Roger Vadim. Alas, after its swinging heyday, Riva went into decline, losing not just market share but also its identity. The signature wood paneling and styling gave way to the sleek shapes of 1970’s and 80’s powerboats, until there was little left to distinguish the brand from its “Miami Vice”-inspired competitors. In the early 90’s, the company even produced an ill-fated Ferrari-themed Riva in fire-engine red. Now, determined to restore Riva to its former glory, its owner, the Ferretti Group, is positioning Riva as the jewel in its yacht-building empire. But the comeback will involve more than just boats: this spring, Riva is introducing a signature collection of Italian-made clothing and accessories, designed to fit in everywhere from Sardinia to St. Bart’s. For example, you can (accidentally) wipe down the deck with the slim cashmere polo and then let it air-dry while you stroll to the Quisisana hotel; an unlined navy blazer is thoughtfully made in ultralight, wrinkleproof cotton; a sporty front-zipped bomber has a lining colored the exact turquoise as that of Riva’s upholstery of the 1950’s. The soles of its deck shoes mimic the curve of the boats’ aerodynamic hulls, and waterproof cotton carryalls hold their own next to crocodile overnight bags. “Riva is to boats what Aston Martin is to cars,” says Robert Burke, a former fashion director of Bergdorf Goodman. “It has one of the richest and most exclusive histories of any name in Europe, but it’s still a bit under the radar, especially in the United States.” Not if you’re an American movie star, however. George Clooney, Brad Pitt and Matt Damon all palled around in Rivas while filming “Ocean’s 12” on Lake Como in northern Italy; soon after, Clooney, who owns a villa there, placed an order for an Aquariva, an updated version of the legendary Aquarama. And the fashion world is also jumping onboard. Stefano Gabbana, half of the design duo Dolce & Gabbana, recently gave his business partner Domenico Dolce a Riva as a gift. “For me, Riva has always represented a dream,” Dolce says. “As a kid, I always admired the boats for their design, color, style and elegance. Riva is the most prestigious brand in Italy.” Which would explain why the shipyards in Sarnico, Italy, where Riva was founded in 1842, are once again backlogged. An entry-level speedboat, like the Aquariva, goes for about $650,000, though the price can vary substantially depending on special-order options, since each state-of-the-art craft is meticulously personalized. If a customer decides, for example, that he wants his boat’s interior to be eggshell white, everything from the G.P.S. system to the screws on the furniture to the bathroom fixtures is eggshell white. The Riva expansion will continue with a women’s clothing line. According to Lorenzo Fasano, the executive spearheading Riva’s brand extension, expect sunglasses, cellphones, pens, fragrances and possibly a mini-chain of Riva cafes to follow in the near future. “Nowadays, everyone seems to be interested in reviving styles from the past,” he says. “But it’s not easy to find a brand that has a heritage and reputation that can still be relevant today.” For Fasano, understatement is the key to Riva’s longevity. As far as he is concerned, the era of ostentation is over, and Riva is poised to become a major player in the stealth-wealth game. “We are not interested in anyone who wears tons of gold chains and wants to arrive in St.-Tropez revving his engine and making a big fuss,” he says. “We don’t believe in unnecessary noise.” 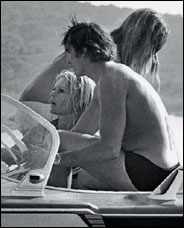 HAIRCUTS :: YOUR GUIDE TO 5 TYPES OF BANGS | Lina Waled

Any cookies that may not be particularly necessary for the website to function and is used specifically to collect user personal data via analytics, ads, other embedded contents are termed as non-necessary cookies. It is mandatory to procure user consent prior to running these cookies on your website.