Femmes were always part of his inspiration. They included names like Brigitte Bardot and Jane Birkin. But no matter the women he had it never changed who he was. Intriguing (unimportant though!) subject about this story is the ugliness of this man opposed to the number of women he seduced and they were really seduced by him and they were really attractive and beautiful.

So Women in this film are relevant, their presence is necessary to the film’s essence. They are exquisite, they are erotic, they are strong and vulnerable. A representation of women. The Women of Gainsbourg (In Fiction) Since his childhood conquests… Girlfriends… First Wife… Muse…(this woman’s voice is something). …until the Bombshell comes. Laetitia Casta makes one of the most turned on entrances ever. Her entire sequence in the film is precious. Certainly it wasn’t easy for her to play The Bomb, Brigitte Bardot but turned out to be one hell of a portrait. Especially when she says “Do we have croissants?” Obviously in French but I don’t how to write it. That was really Bardot of her! There is no one quite like her…but still. Lucie Gordon played Jane Birkin. She carried a dramatic and absorving performance; extremely professional and concentrated, always trying to portrait Jane’s authenticity. It’s sad she’s gone. Last but not least, his third wife…Aren’t they countless? Posted by Rachelle 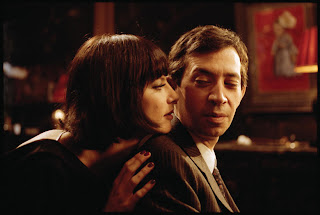