The Steve Irwin is closing in on the whaling fleet’s factory vessel Nisshin Maru as the groups head south for the start of this year’s battle over Japan’s plan to kill more than 900 whales.

Sea Shepherd used high-tech drones to find the whalers on Christmas Day and expects to catch up with the Nisshin Maru by New Year’s Eve.

The anti-whaling group plans to block the factory ship’s slipway to prevent any dead whales being dragged aboard and flensed. 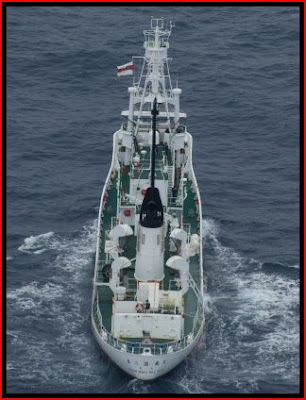 Steve Irwin captain Paul Watson said yesterday he was surprised by the military-style bunkers on the decks of the vessels and extent of the whaling fleet’s security.

“There seem to be a lot of changes on the Shonan Maru 2 this year, with armed security personnel and they seem to have a bunker-type thing on the top of their ship with sandbags,” Capt. Watson said.

“I don’t know if they are expecting us to attack them with weapons or something. They seem awfully paranoid.

“We are just there to stop them killing whales but we are doing everything we can to make sure we don’t hurt these people.”

Capt. Watson said rancid butter bombs were the worst thing the conservationists would be using against the whalers this year.

Sea Shepherd’s other two ships, the high-speed Brigitte Bardot and the Bob Barker, were not being tailed by the Japanese.
Twenty Australians are among the Sea Shepherd’s crew of 88, including five West Australians. The West.com.au

Continue Reading
Advertisement
You may also like...
Related Topics: