QuickLinks: Solution to today’s crossword in the New York Times Solution to today’s SYNDICATED New York Times crossword in all other publications CROSSWORD SETTER: Allan E. Parrish THEME: Anagram of “STAKE” … all of the theme answers end with a word that is an anagram of the letters STAKE: 17A. It goes in the ground at a campground : TENT STAKE 24A. Four-wheeled wear : ROLLER SKATE 35A. Tenderized cut of beef : MINUTE STEAK 47A. “Huh … what?” reactions : DOUBLE TAKES 56A. “Ode on a Grecian Urn” poet : JOHN KEATS ANSWERS I MISSED: 0 Today’s Wiki-est, Amazonian Googlies 5 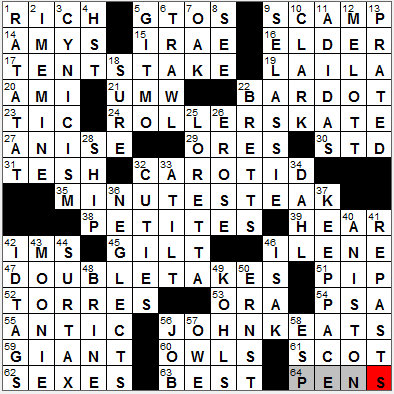 in all other publications

CROSSWORD SETTER: Allan E. Parrish
THEME: Anagram of “STAKE” … all of the theme answers end with a word that is an anagram of the letters STAKE:

14. Grant and Carter : AMYS
The name “Amy” is often an anglicized version of the French name “Aimée”, which translates to “loved”.

Amy Grant is known as “The Queen of Christian Pop” and her most famous songs are Gospel and Contemporary Christian works. “Baby Baby” is one such song, released in 1991, a number-one hit for her.

Amy Carter is the only daughter of President Jimmy Carter. She is the youngest child, and has three older brothers. After growing up in the White House, Amy Carter turned to political activism and was very vocal on US policy towards South African apartheid and Central America. She was arrested at a 1987 demonstration, but was later acquitted. Today she has a close relationship with her father, and is on the board of counselors of the Carter Center. In 1995 she provided the illustrations for her father’s book for children, “The Little Baby Snoogle-Fleejer”.

15. “Dies ___” : IRAE
“Dies Irae” is Latin for “Day of Wrath”. It is the name of a famous melody in Gregorian Chant, one that is often used as part of the Roman Catholic Requiem Mass.

19. Muhammad Ali’s boxing daughter : LAILA
Laila Ali is the daughter of the great Muhammad Ali, and is a very capable boxer in her own right. She’s not a bad dancer either, coming in third place in the fourth season of “Dancing with the Stars”.

21. Coal diggers’ org. : UMW
The United Mine Workers (UMW) is a labor union that represent mine workers (and now other disciplines) in the US and Canada. The UMW was founded in Columbus, Ohio in 1890.

Local solar time was replaced with standard time zones with the increasing use of rail travel and telecommunications as the variations in local solar times became very inconvenient. Time zones in the US vary in hourly increments, but in some parts of the world a 30-minute or even 15-minute difference can apply.

31. Former “Entertainment Tonight” co-host : TESH
John Tesh is a pianist and composer, as well as a radio and television presenter.

35. Tenderized cut of beef : MINUTE STEAK
A minute steak is also referred to as cube steak. It is a cut of top round or top sirloin that is tenderized by pounding with a mallet.

42. Online exchanges, briefly : IMS
Those would be Instant Messages.

45. Expensive coat? : GILT
Gilding is the application of gold leaf or gold powder to a solid surface, perhaps wood or another metal. The method of application can vary, from the use of a brush to electroplating.

46. ___ Chaiken, co-creator/writer of “The L Word” : ILENE
Ilene Chaiken was the executive producer for the Showtime drama series “The L Word”. The show deals with lesbian, bisexual and transgender people living in West Hollywood. The title refers to “the L word”: lesbian.

52. Baseball brothers Joe and Frank : TORRES
As manager, Joe Torre was part of four World Series wins, all of them with the New York Yankees baseball team. Torre is an Italian American, born in Brooklyn, New York. During the run up (pun intended!) to the 2006 Winter Olympics in Turin, Torre carried the Olympic flame part of the way through Florence, handing it over to the next runner at the famous Ponte Vecchio. I’d guess that was quite a thrill for him …

Frank Torre is a former first baseman who played for the Milwaukee Braves and the Philadelphia Phillies. Frank is the older brother of player and manager Joe Torre.

53. ___ pro nobis : ORA
“Ora pro nobis” translates from Latin as “pray for us”. It is a common term used in the Roman Catholic tradition and is often shortened to “OPN”.

55. Like Robin Williams, typically : ANTIC
Robin Williams a very unique actor and comedian who came to prominence playing one of the title roles in the TV show “Mork and Mindy”. Since then he has had many fine performance on the big screen, and won an Oscar for his work in the 1997 “Good Will Hunting”.

56. “Ode on a Grecian Urn” poet : JOHN KEATS
John Keats is famous for writing a whole series of beautiful odes. The most famous are the so-called “1819 Odes”, a collection from the year 1819 that includes famous poems such as “Ode on a Grecian Urn”, “Ode to a Nightingale” and “Ode to Psyche”.

59. 12-Down, for one : GIANT
(12. Hitter of 511 career home runs : MEL OTT)
The San Francisco Giants have won more games than any other team in baseball, partly because they are one of the oldest teams in the league. The Giants started out as the New York Gothams in 1883 and became the New York Giants in 1995. The team moved to California in 1958.

61. Many a wearer of plaid : SCOT
Tartan is sometimes called “plaid” over here in the US, a word not used in the same sense outside of this country. In Scotland a “plaid” is a blanket or a tartan cloth slung over the shoulder.

Down
2. George Harrison’s autobiography : I ME MINE
“I Me Mine” is one of the relatively few Beatles songs to have been written by George Harrison (and indeed performed by him). Harrison chose the same title for his autobiography published in 1980, just a few weeks before John Lennon was assassinated in New York City.

4. Fair Deal pres. : HST
Harry Truman wanted to go to West Point, having served with the Missouri Army National Guard on active duty in WWI, but he couldn’t get in because of his poor eyesight. He didn’t have the money to get into college anywhere else. He did, however, study for two years towards a law degree at the Kansas City Law School in the twenties, but never finished. So, Harry S. Truman was the only US President who did not have a college degree.

5. U.S. base in Cuba, informally : GITMO
The Guantanamo Bay Naval Base is often known by the abbreviation “GTMO” or simply “Gitmo”. The base is the oldest overseas base operated by the navy, and dates back to the Cuban-American Treaty of 1903, at which time the US leased the facility as a fueling station. The perpetual lease was offered by Tomas Estrada Palma, the first President of Cuba, after the US took over control of Cuba from Spain following the Spanish-American War of 1898.

9. Ethiopia’s Haile ___ : SELASSIE
Emperor Haile Selassie I
ruled Ethiopia until he was removed from power in a revolution in 1974. He died in 1975, under suspicious circumstances, and it is widely believed that he was assassinated.

11. New Balance competitor : ADIDAS
The brand name “Adidas” dates back to when Adolf “Adi” Dassler started making his own sports shoes in his mother’s laundry room in Bavaria after returning from WWI. With his brother, Adi founded Dassler shoes. The companies big break came in 1936 at the Berlin Olympics when Adi persuaded American sprinter Jesse Owens to use his shoes, and with the success of Jesse Owens came success for the fledgling shoe company. After WWII the brothers split, acrimoniously. Adi’s brother, Ru-dolf Da-ssler, formed “Ruda” shoes (later to become Puma), and Adi Das-sler formed “Adidas”.

New Balance is a footwear manufacturer based in Boston, Massachusetts.

Ken Brett was a Major League Baseball pitcher. He played for a total of ten teams in a professional career that lasted 14 years. He is the older brother of the third baseman George Brett.

25. “Get back, ___ … Go home” (Beatles lyric) : LORETTA
The Beatles song “Get Back” was first released in 1969. It is the only Beatles song that gives credit to another artist on the label, naming the keyboard player Billy Preston.

26. Not even, as a leaf’s edge : EROSE
An edge that is “erose” is irregularly notched or indented.

34. Author Roald : DAHL
Roald Dahl’s name is Norwegian. Dahl’s parents were from Norway, although Dahl himself was Welsh. Dahl became one of the most successful authors of the twentieth century, and a couple of his most famous titles are “James and the Giant Peach” and “Charlie and the Chocolate Factory”.

40. Jennifer of “Friends” : ANISTON
Jennifer Aniston won a 2002 Emmy for playing Rachel on the great sitcom “Friends”. Jennifer’s parents are both actors, and her godfather is the actor, Telly Savalas.

46. Writer Dinesen : ISAK
Isak Dinesen was the pen name of the Danish author Baroness Karen Blixen. Her most famous title by far is “Out of Africa”, her account of her time living in Kenya.

49. Macy’s competitor : KOHL’S
Kohl’s is a department store chain with its headquarters in a suburb of Milwaukee, Wisconsin. The store takes its name from the founder, Maxwell Kohl.

50. ___ & Young, big name in accounting : ERNST
Ernst & Young is one of the Big Four accountancy firms, alongside Deloitte, KPMG and PricewaterhouseCoopers. Ernst & Young is headquartered in London.

56. Offering on Monster.com : JOB
Monster.com is a huge (monster!) employment website. At any one time there are apparently about a million jobs posted on the website.

Return to top of page

Continue Reading
Advertisement
You may also like...
Related Topics:bridgitte bardor